Do you have some sort of a hack to writing lyrics that works every time? How do you come up with lyrics to your song? Is it hard for you to even get started or to form a structure for lyrics? For me it sure is. Writing lyrics is hugely about inspiration. Like with everything else, you need the right mood and the state of mind to write anything worthwhile.

What if the right mood, inspiration or state of mind never comes across? No worries my friend. This is my method of writing lyrics and in this post I’m presenting you another hack that eases the process of finding the inspiration and structuring your song.

What if you simply borrowed a structure from a song that you like? That’s right. Pick a song that – in your mind – has great lyrics. Use its structure as a starting point. Choose a song that inspires you, lyrically.

How Does It Work?

Start by analyzing the song. What’s the writer saying in each of the lines? Is he / she describing feelings, time, space, people or perhaps action? Is there some agenda throughout a section of a song? You can then copy these elements to your own song. Not from word to word by any means, but rather try to find the idea behind the words.

Have the lyrics next to you, and part by part, line by line start going through them. Take a piece of paper, Google docs, notepad or something and write your own lyrics at the same time you’re analyzing the original song. Let’s take an example and go through the process.

Example of Using the Structure Hack

I picked a song from Deaf Havana called St. Paul’s. The first verse goes like this:

It was November, and I was a mess

And I was thinking of leaving her back then

As if by magic, you and I met

And it brought me back to life again

Next up I start going through the lines, while at the same time writing lyrics to my own song. For the first two lines: I could start with a month, a day or something and continue with how I felt and what I thought about doing. The next two lines: Something happens related to the thing I was about to do, and then I describe how it affected me. This is what I came up with:

On Christmas Eve, it was freezing

I craved to go inside

Just then, I saw you approaching

And it pushed my cold aside

See how I’m having the same structure in my song, but I don’t exactly copy the original text? Okay, moving on. Here’s how the original song continues:

You’ve got a certain something about you

And I’ve got a past I want to leave behind

It’s been a long, long time since I met someone

Who made me happy to be alive

I could start by describing both myself and the person in my song. After that I explain how seeing that person makes me feel something and how it has been a long time from something.

You’ve still got that smugness in your smile

Although I used to be powerless and weak

For the first time in ages

You make me want to fight

Now the bells of St. Paul’s ring out in my head

Next up I hear something and it reminds me of something else.

Now the wailing sirens remind me

How I spent the Christmas Eve in jail

I can’t go back to living in silence

No, I can’t go back to sleeping alone

All the years she made me live as a liar

Ended up becoming all that I know

In the chorus I write about how I can’t go back to something, how someone made me live for years and how that shaped me as a person.

I won’t go back to hiding my bruises

I won’t go back to living in fear

The times you made me feel like a loser

Woke up a ruthless, volatile monster

This is how the original song and my “borrowed” example song look like: 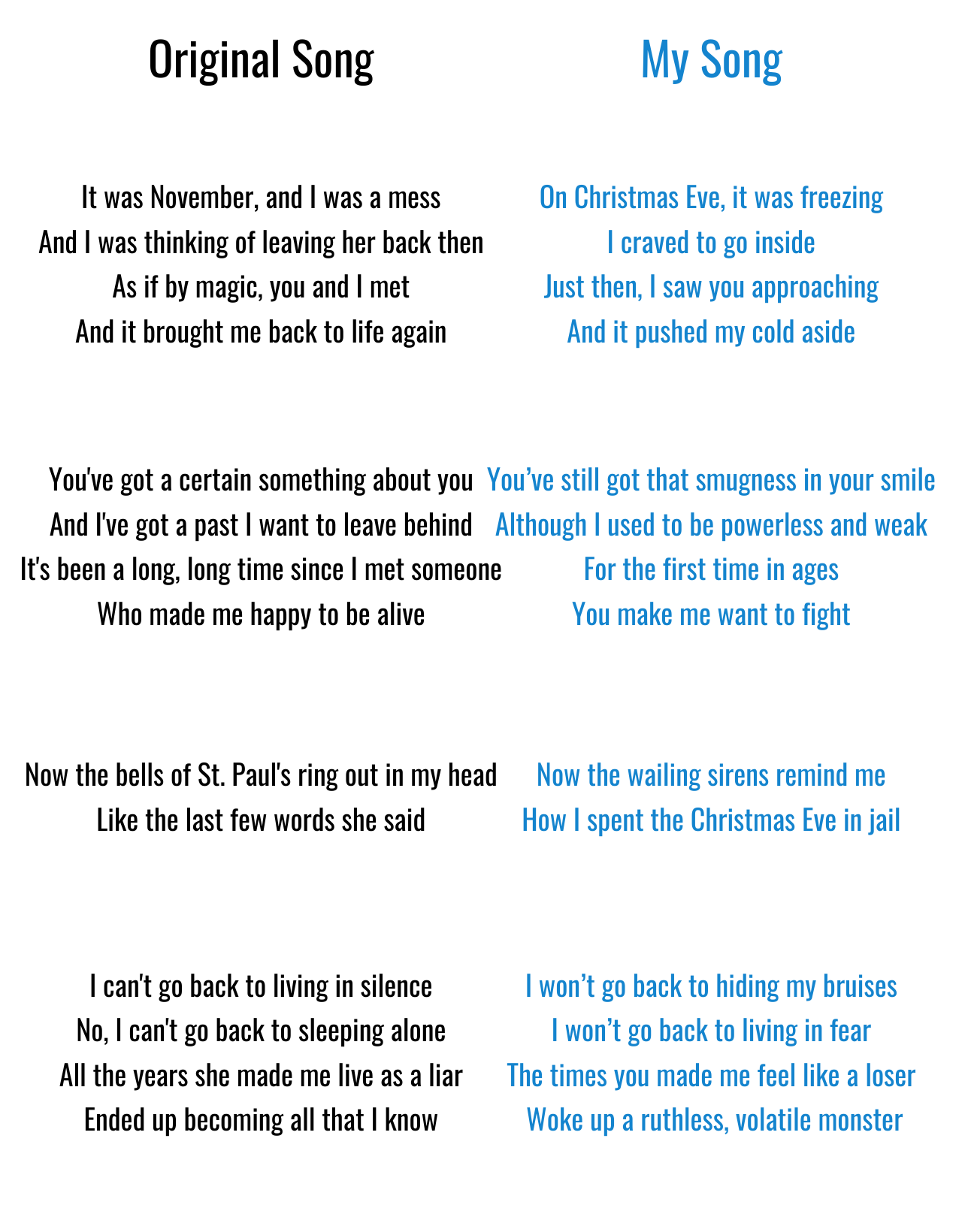 Look at that, what do you know, just like that a relationship song turned into a school bullying song… In all seriousness, I wrote these example lyrics while writing this blog post, and I’ve got to tell you, it’s really easy and fun way to do it.

I’ve done it multiple times and it just keeps on amazing me. When I started out writing these lyrics, I didn’t really know where the story was going, but once I got the second verse an inspiration already started to poor in.

Back to the point: You don’t have to copy as much as I did. It’s a good way to get started, but you don’t have to go all the way through with it. Of course, once you get going, you can move on into whatever direction you choose to. This is just an example of how you can easily “borrow” a song structure, but also gain some inspiration in the process.

The context, rhythms and melodies are probably very different in your own song. Because of this, nobody can tell if you’ve copied the structure somewhere else. That’s the beauty of it.

I’m not claiming my example song is a masterpiece, but it could be used as a starting point. For instance, I could save just a part of what I wrote and come up with a whole other story with just that. In the end it’s all about ways of creating inspiration, and this hack for writing lyrics has proved to be a good one.

In case you’re finding it hard to get any lyrics on paper, explore with this strategy to see if it works for you. Pick a song you like and follow the process. Hopefully you’ll find this hack to be as useful as I did.

If you’re struggling to translate songs from your head to the real world, you’re stuck in a composing process or you don’t know how to record, mix or master your songs, download this PDF-guide. It’s yours for free today, no strings attached.