Mixing drums can be tough, as there are (usually) so many tracks. The roles of each track can vary from genre to genre. In hard-hitting music, such as rock and metal, overheads have a certain role to play. In this video you’ll learn the mixing of focused and crisp overheads, that are pleasing to listen to:

The overheads can be in one stereo track, or separated into two mono tracks, panned left and right. Whenever the tracks are separated, I tend to route them into an Overhead Bus, and apply the mixing processing straight into the bus instead of the individual tracks.

Mixing overheads doesn’t have to be that complicated to be honest. All you need is an EQ and a compressor. In hard-hitting music, usually bulk of the drumming job is done by kick and snare, so when it comes to overheads, you’re mainly looking for cymbal sound.

Start by low cut filtering from 200 to 350 Hz. The low end of overheads just gets in the way of kick and toms anyway. If that’s not enough, then a low shelf can help in addition. Boost with high shelf from around 10 – 12 kHz upwards to achieve that ear pleasing crispness and sheen. Cut mud from around 160 – 300 Hz and boxiness / plastic sound around 400 – 900 Hz. If you want to reduce the kit sound, the latter helps also.

When it comes to compression, you definitely don’t want to over do it. Slow to medium attack and fast release tends to work really well. Usually gain reduction of 1-3 dB is enough to achieve that focused and even sound. The compressor tames the peaks of snare and brings cymbals forward. That’s pretty much it. 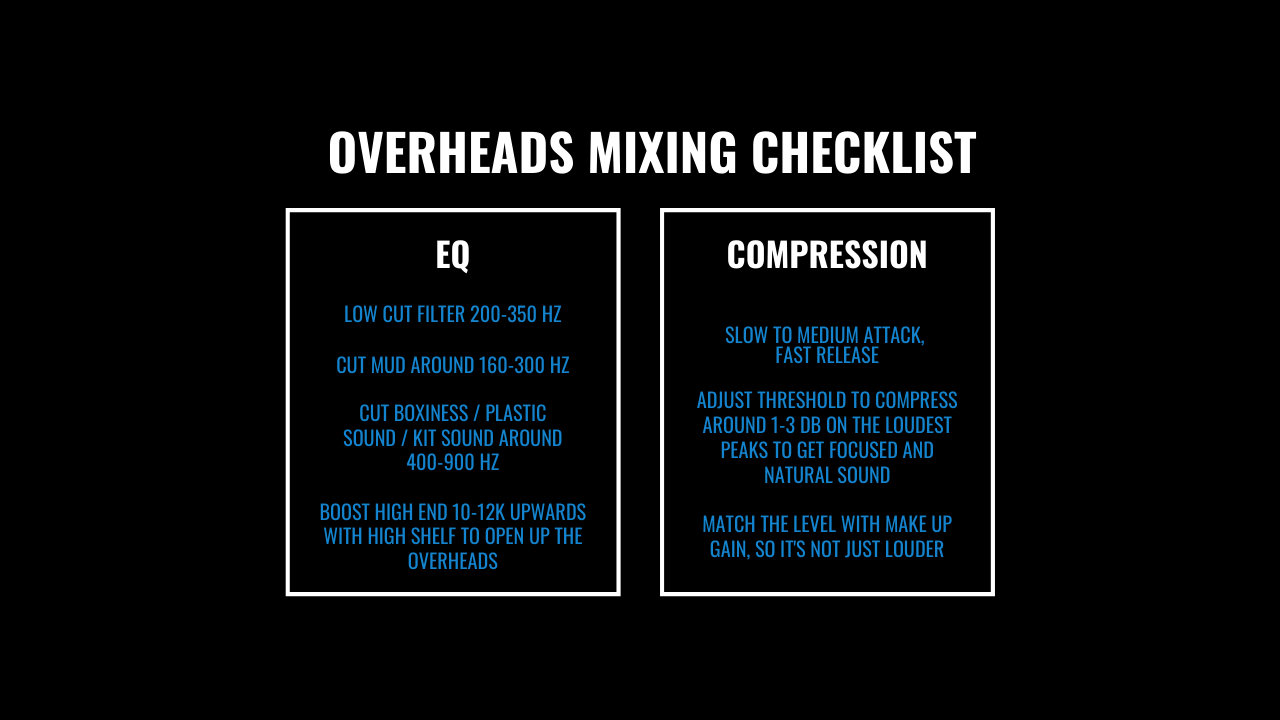 Hopefully you found this video helpful. If there’s anything you want me to cover in the future videos let me know. Send me an email or leave a comment below. Ask if there’s anything unclear or if I left something out. Cheers!